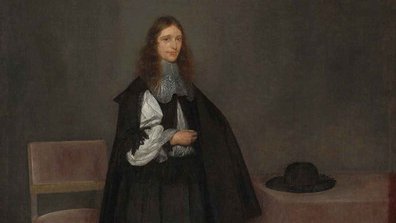 Behind an object as simple as a hat lies a complex cultural code. Hats feature in many seventeenth-century portraits. It has long been established that all kinds of objects in these portraits (gloves, handkerchiefs, skulls, candles, etc.) hold deeper meanings, but little attention has been paid to hats. Joris Oddens studied more than 1,200 portraits, around 10 per cent of which featured hats, and he found that the positioning of the hats in these portraits followed a meaningful pattern.

Some of the subjects were shown wearing their hats, others were not; and there was more to this than the compositional considerations of the painter. Oddens shows how citizens in the seventeenth-century Republic used hats in portraits to express their socio-political identity. In cities such as Amsterdam, The Hague, Delft and Deventer, wealthy men were painted with their hats off, to emphasise that they belonged to the regent class; others, by contrast, wore their hats to underline their status as municipal citizens. This ‘language of hats’ reflected the Ciceronian idea, common in the Early Modern period, that both a life in the service of the res publica and a life as a citizen without office were considered honourable. Following the hat thus reveals how Dutch identities were formed.